Why do I need remove wisdom teeth?

Wisdom teeth are the last in the tooth rows, located behind molars. Wisdom teeth are extracted to avoid problems in the future, to eliminate inflammation or other problem. When wisdom teeth push through, usually unfavorable situations are encountered. Very often the jaw is too small, so there’s not enough space for wisdom teeth, they bundle up in the jaw, can push other teeth, change their position. Due to their incorrect position in the jaw, they may never push through. An X-ray image of the entire jaw is needed to determine whether it is so. 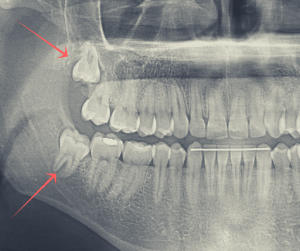 Also, the growth of wisdom teeth can be complicated because for them it’s difficult to push through the gums. If the wisdom tooth grows only partially, part of gums still covers it. Food and bacteria accumulate beneath them, so gums turn rubescent, swell up and may ache in that area. These are the first symptoms of a starting infection. Dental diseases and inflammations may occur. If the wisdom teeth are crushed in, they may damage the bone and the adjacent molar tooth. A cyst may form. Grown wisdom teeth usually have an irregular shape, may be angled. It’s difficult to reach them with a toothbrush; therefore, bacteria remain there regularly, even after the brushing.

The oral surgeon can remove the grown and not yet grown wisdom teeth. The surgery is performed at the clinic. If the infection has begun, the surgery is postponed, and a course of antibiotics is prescribed. Then, the teeth can be removed.

Some people have all four wisdom teeth pushed through and had never faced the said problems. Some patients choose the extraction of wisdom teeth even before they push through and avoid health problems. The decision depends on your wishes and the doctor’s recommendations. The surgeons recommend removing wisdom teeth at a young age, after reaching 16-19 years of age. Teenager’s roots and bones are softer because they aren’t entirely formed yet, so it facilitates and fastens the healing process after the surgery is performed. To avoid problems, it’s recommended to remove wisdom teeth before the age of 20 years.

If you are thirty years old and had no complaints regarding wisdom tooth, it’s very likely that there’s no need for you to remove them. Wisdom tooth which is healthy and pushed through in the right place don’t cause any problems, but it rarely happens.